Here is a map of planet Earth I borrowed from the U.S. Senate showing Canada on top. 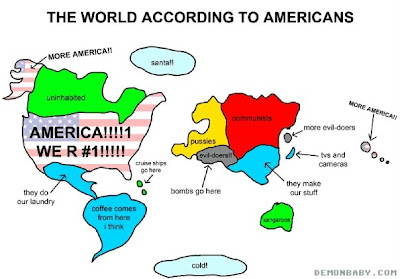 The fact is that it does Canada a lot of good to never get mentioned in the media. It lets Canada get away with a lot of facts and events that are done without anyone knowing. Canada is involved in wars along side the United States and they always get the blame for every little thing that happens. It is such a big secret that a story released recently had Canadians ranting and raving about Iraq. Too anyone paying attention to what our politicians are doing most of us found it odd that it was released 10 years after the fact. Canada had special operations forces in Iraq before George Bush ordered the preemptive attack.

It made me wonder if Canadians know that we have over 3000 armed forces in Afghanistan. My fellow Canadians are so entrenched in the 900 channels of television that come from the U.S. they forgot how to vote. The “War Room” in Canada is about politicians and Parliament and perhaps that is way they are so confused. At the moment I am using a few links directed at our national, taxpayer funded, CBC broadcaster, which some of us call the Calgary Bubblegum Corporation. There are only two other television networks in Canada the CTV and Global TV. The front page of CTV, a Bell owned network, is covered with TV programs from the United States as well as Global now owned by Shaw Media.

I cannot leave the subject of war without telling you another secret. Canada hides behind NATO which for the most part is largely run by the United States and Britain. When I tried to put a link to the main NATO website the message said “not found”. However we always count on Facebook to have something to say about everything including NATO. After quickly scanning over the photos there is one photo of a Canadian frigate. Whoever put up the page does not know that Canada has an Armed Forces and F-18s in Libya. We do love the Net due to the many places a person can find information without using the ultra biased Wikipedia.
The Dark Side

"I, ....., do swear that I will be faithful and bear true allegiance to Her Majesty Queen Elizabeth the Second, Queen of Canada, Her Heirs and Successors."

Canada is a Constitutional Monarchy that is also a Parliamentary Democracy and a Federation. The Chief of State: Queen ELIZABETH II (since 6 February 1952); represented by a Governor General. She is also the Commander in Chief of the Canadian Armed Forces. Those who want her as our Monarch will always say that it is in name only as the Queen of Canada. As a Canadian I want her photo and emblems removed from every place it now exists in Canada. I also want our politicians to swear an Oath of Allegiance to Canada, Canadians and our Charter of Rights and Freedoms so they can be held accountable for every piece of legislation.

We might be able to do something about issues that concern most Canadians. Here are a few of them. Canada has a labor Force of 18.59 Million with 8% of that number unemployed. The other group that may astonish some is the number of Canadians below the poverty line. Although Canada has no official policy on poverty it is described as those below the Low Income Cut Off. That line of $9,000.00 is set by the number of Canadians that do not earn enough money to pay any Income Tax. Currently there is 9.4% of the labor force that falls below that income threshold. The number of under-employed is not available and most of us with an economic background believe it is close to 10%. The number of close to 30% is tragic and due to the selling off and closing of manufacturing operations in Canada. The NAFTA treaty between Canada and the United States that later included Mexico back fired when good paying jobs left North America.

The claim of 40 million jobs includes jobs that keep a person working a 15 hour week at $8.00 per hour. Fast food outlets are considered employment at these survival wages without any benefits. I must bow my head in shame in order to tell you that I managed a large multi-national store with earnings in the billions of dollars per year. Staff were paid between 8 and 10 dollars per hour and we could not allow anyone to work more than 24 hours per week. In the entire store there was not one item made in Canada. Items purchased at a cost of 3 cents were sold at 3 to 4 dollars each allowing the billionaire owners a life of luxury and very low taxation.

Try living on an income of $900.00 a month with your rent taking up $600.00 followed by your cost of electricity at $60.00. Close to 5 million Canadians from the labor force do it every day while our politicians hand out billions of dollars to their corporate friends. At this point the families have not been included in the numbers.

Good paying jobs can be created in Canada although I have my doubts that any politician does anything for Canadians. A few examples of what could be done over the coming decades to create real jobs that have a future.

Canada is one of the top polluters in the world if not the very top. We dump over 1.6 trillion liters of raw or partly treated sewage into the waterways and into the Pacific, Arctic and Atlantic Oceans. Our forests in all areas are devastated by deforestation and the pine beetle. Rapid transit barely exists in the urban areas which encourages people to use their vehicles. Solar energy is the next generation of fuel for the planet and Canada continues to use coal as electricity consumption increases.

Posted by denniscambly.com at 3:48 PM