Letter to my Friends in America

It has been some time since I wrote a letter since we have all these new technologies. There is an app for everything under the Sun yet we rarely talk face to face. I prefer the conversations over a good cup of coffee to a line of text any day of the week.

As you know I remain disconnected from the fantasy world of television. I stopped by to see Anita and she had one of those devices playing. In two hours there were twenty-two violent deaths portrayed on two of the shows. Apparently the programs are in their 9th or 10th season due to people being big fans. I've often wondered what the relationship to watching so much death has to being happy about war.

Later I headed over to see Nash. You remember him from years ago. He keeps his children busy playing video games or watching television. I couldn't help myself from making a comment about the 70 inch screen being plastered with blood from the video games. Nash shrugged and talked about how is doing much better after the third divorce. He and his new spouse are expecting a baby soon. They currently have five children between nine to eighteen years old. I thought it would be prying to ask if the children get confused about the parent thing. I've never believed the village has any control over the wishes of a family.

The Internet remains a great place to meet people and stop for a chat. After the Bush Jr. debacle it is difficult to  believe an election could be so dramatic. I always thought the person with the most votes gets to be the President. That election proved me wrong.

I pulled a short story from my daily journals started when I was fourteen. As children we would spend our summers at the cottage. It was a log cabin deep in the wilderness without electricity. About twenty cottages built on the shores of McKenzie Lake made summer a wonderful experience. Great fishing, swimming, chopping wood along with many other chores gave it a lively time. Evenings sitting near a fire on the sandy beach is embedded deep in my consciousness. My friends and I would talk for hours under the star filled night sky. Everyone except big Tim, age fifteen, were between ten and twelve years old. There was a radar base operated by the U.S. military nearby. The young soldiers, 18 or 19 years old, would often visit for a home cooked meal or to let us kids know the events they planned for us.

Our summer cottage at McKenzie Lake

One particular night in August one of the soldiers sat with us at the beach fire. They were always welcome to join us and tell stories. He appeared restless and asked us how fast we could get to the base. We told him it would take less than a ten minute run with Tim declaring he could run faster.

As he looked at each of us words slowly fell from his lips. "There are often problems when adults forget how to talk to one another. We have a situation where a few of them are getting angry with each other. Promise me, the next time you hear the air raid siren, you will run to the base and we will do our best to protect you." We made a promise to him because he was cute too. Nature gave us a hot summer including her wind, rain, thunder and lightning.

When we were back in town I could hear his words as the sirens wailed daily, or more, during September and October. There was no safe place to run so Mom, my younger brother and I huddled under the basement steps. Even today I can hear the air raid sirens in my dreams. Those 13 days during October, 1962 were terrifying.

Despite all the rhetoric spread everywhere today we became friends with the people who played a major role in winning World War II. The cold war ended long ago and I am happy it did. I was re-united with family in Russia and Ukraine after the Berlin Wall came crashing down. For a brief moment I felt a very beautiful sense of peace.

I know you have an important day coming up to elect your next President. This I can promise you as a citizen of the world. I will always be your friend as will the people of Russia. We are counting on you to vote on November 6, 2016 and bring those adults into the room to talk.

I hope before I die those air raid sirens will stop messing with my dreams.

"For, in the final analysis, our most basic common link is that we all inhabit this small planet. We all breathe the same air. We all cherish our children's future. And we are all mortal." President John F. Kennedy June 1963 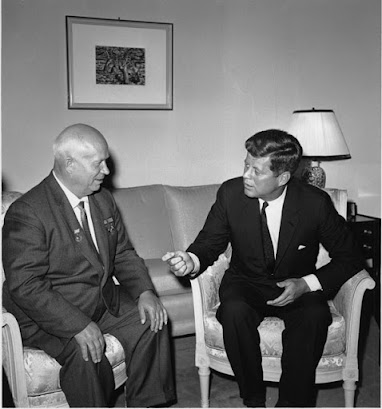 Posted by denniscambly.com at 8:47 AM No comments: