What began as a small wildfire on May 2, 2016 became nature's rage of fury. Premier Notely showed every Albertan how to handle an emergency. The probability of getting every person out of Fort McMurray to safety was a daunting task. One four lane highway southbound could have easily turned into a big tragedy. Up to 90,000 people needed to evacuate Fort McMurray as orderly as possible. They drove south with the wildfire roaring along the highway.

Premier Notely worked with her administration in conjunction with individuals, police, fire fighters and industry to ensure the safety of evacuating residents. 1000s of videos along with photos made their way to broadcasters and social networks. It appeared as though the Premier was giving updates every hour. 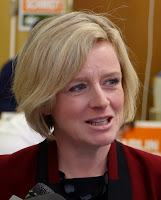 Her request was simple; "everyone needs to work together" and together cities large and small did it. People volunteered their time to set up temporary facilities and coordinate the incoming donations of food, clothing and places to sleep. The province of Alberta became a beehive of activity with everyone working together.

"The wildfires ravaging Canada’s oil hub in northern Alberta have rapidly spread to an area bigger than New York city, prompting the air lift of more than 8,000 evacuees as firefighters seek to salvage critical infrastructure."

Global Edmonton reporter Fletcher Kent, was reporting on the Fort McMurray wildfire, at times having to run from his assignment. Fletcher shares his experience covering the story and the incredible generosity of those in Fort McMurray.

As the wildfire continued to grow Premier Notely put in place funds to assist the people of Fort McMurray in every way possible. With the economy of Alberta already facing a downturn due to low oil and gas prices the "Tory old boys club" were busy making snarky comments. For most I commented back with "you  had 40 years now get out of the way".

Premier Notely continued with the updates giving information of value to everyone dealing with the wildfire. She was doing exactly what a leader should do.

Fire fighters continue to do a street by street sweep ensuing all fires are extinguished. Today some equipment is heading north to do repair work in Fort McMurray. The RCMP are ensuring only registered company vehicles are allowed into the area. They are protecting the property belonging to the residents.

The line ups were long as the emergency funding was released to the Fort McMurray residents.

Rachel Notely we can safely say Albertans made a wise choice by voting to have you as our Premier.

Posted by denniscambly.com at 12:45 PM No comments: