No end in Sight

There have been many announcements about the end of coal-fired electricity in Alberta over the last two years. On the surface it sounds great to reduce the toxic pollution created by coal. Coal plants are a major source of air pollution, releasing pollutants such as: cadmium, lead, mercury,  nitrogen oxides and sulfur dioxide into the environment. When I use the term environment it covers: air, land, water and atmosphere.

Coal mining in Alberta has a long history of employment and a reasonable living. Long before oil and gas were discovered coal kept everyone warm. Many of the people in the early days of coal mining suffered from black lung disease, chronic and acute respiratory diseases. It is proper to say thank you to those who mined the coal and their families.

The government of Alberta in conjunction with industry and the private sector intend to make the transition over the next thirteen (13) years. All of the remaining coal-fired electrical plants are to be converted to natural gas combined with renewable energies.

During the time Peter Lougheed was Premier he told Albertans the foothills would be a place for recreation. The Federal government had already created Jasper National Park and Banff National Park bordering on Alberta and British Columbia. Millions of people from everywhere know about the parks and use them all year. They have become so expensive it is unlikely most Albertans can afford the costs. Waterton National Park was created prior to 1900 in the southwest corner of Alberta bordering on Montana. Kananaskis Country is another popular park area in Alberta easily accessed with three highways. All of the services shown in the diagram are available, at a cost, to anyone who needs to bring every possible appliance along with their gas guzzling home on wheels.

Many Albertans, including myself, would rather get away from the noise pollution in the larger parks. There was one place in Alberta to camp in the back country away from the city pollution of noise, light, concrete and pavement. It is on the map as the Whitehorse Wildland Park located between Jasper and Banff on the Alberta side of the Rocky Mountains. 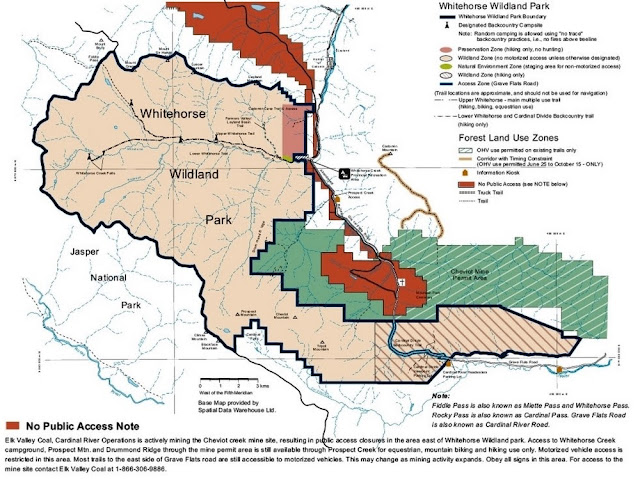 Click on the image for a larger and more readable map. As you can see a large part of this so-called park is no longer accessible to the public. The four ghost towns in the green and red area near the bottom of the map were plowed under by the coal mining companies. They were kind enough to relocate the Mountain View cemetery a good distance from it's original location. Tech Resources is the company handling all of the mountain removal and open pit coal mining.

I began camping in this area in 1978 when it was absolutely pristine wilderness with mountains, forests, rivers, creeks, wildlife and a single lane forestry road. You cannot imagine the untouched scenery with the universe alive in the night sky. The rivers and small creeks were fed from melting snow and glaciers making it ice cold and drinkable. A Forestry Ranger gave a forestry road map to me while advising of some dangers on the roads. It was a park where anyone staying could camp in one place for two weeks at no cost. Although the government website states there is no cost today there is a charge of $12.00/day. It includes all the horse manure and urine your nose can handle. 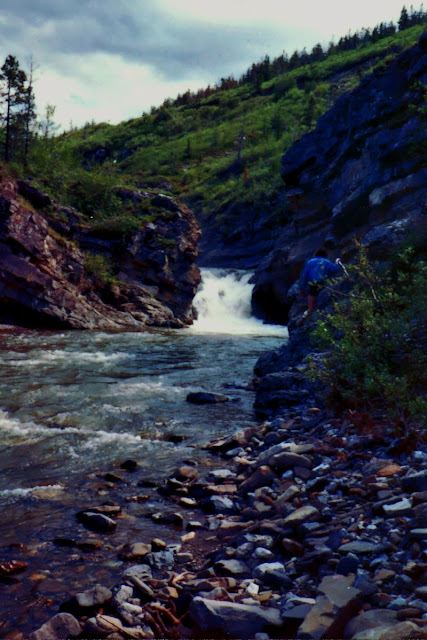 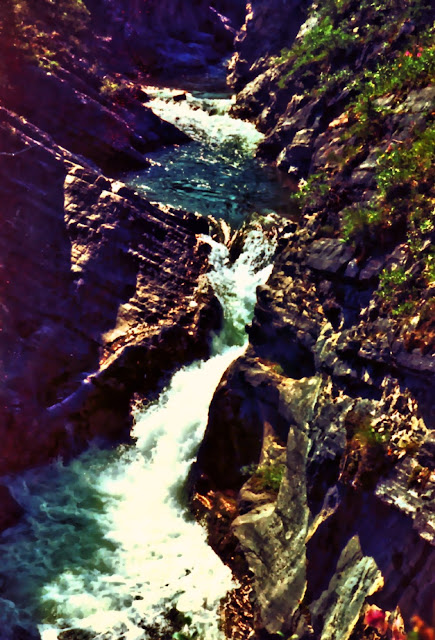 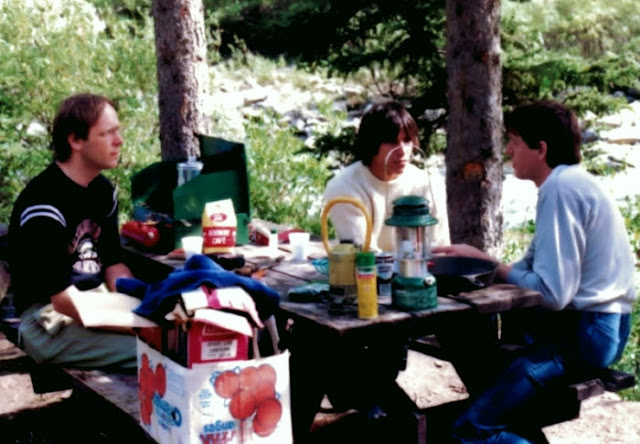 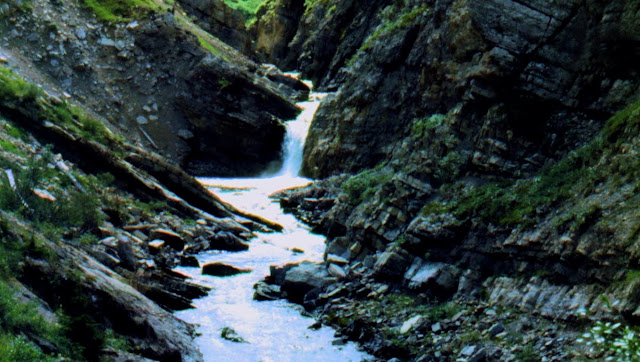 Photos are from my collection taken with a 35mm camera with film from 1978-1989. It was easy to leave the world behind and fall in love with nature. All the photos should be larger with a simple click.

According to thousands of documents I was able to retrieve geologists began to seriously study the rock formations during the 1980s. Work was done prior to that time though not to the same extent. The Conservative governments under Premiers Getty and Klein opened up the park to remove the coal without any rules or regulations.

This was once a mountain range on the outer limits of the Wildlife Park taken in 2015. Trees will not grow on the grass covered hills because there is not enough soil for a tree to grow. It's a panorama photo you can enlarge to see the extent of the destruction.

360 Video Shows where Mountains and Forests once Existed

Coal mining requires plenty of water to keep the coal dust contained and processed. The water is no longer drinkable from the rivers and smaller creeks. Large tailings ponds are everywhere around the park. The toxic lakes of pollutants are located above the groundwater basin for the North Saskatchewan River.

The river supplies drinking water to many towns and cities including Edmonton, Alberta and Saskatoon, Saskatchewan all the way to the Hudson's Bay. A constant flow of chemicals enters the tailings ponds every minute of every day from the coal open-pit mines. There is nothing stopping the toxins from entering the groundwater.

What Is an Open-Pit or Surface Mine?

Let's use a photo and a short video to explain what happens because you really don't want me to explain it with words. The first photo is from the mining industry where they leave out the tailings ponds. 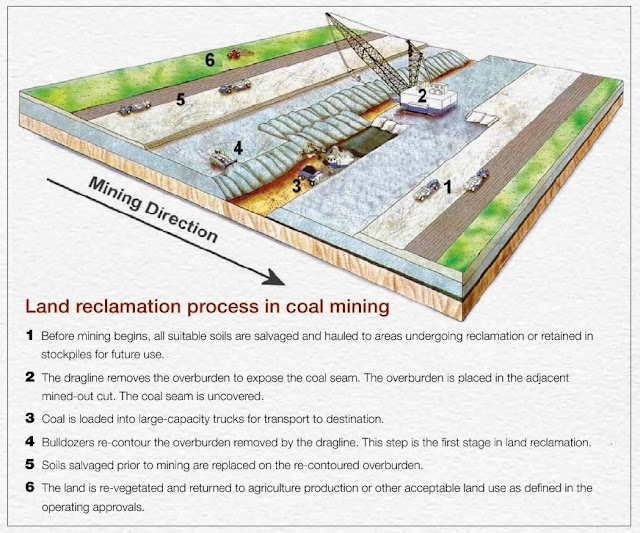 I will show you steps 4-5-6 in photos before and after with photos taken in the park. The overburden mentioned in Step 5 is the removal of an entire range of mountains. What took nature a hundred million years to create the coal mining companies can cover up in a few months.

This short video is about mountain top removal in West Virginia. The same techniques are being used in Alberta's open-pit coal mining.

This is a tailings pond sitting where that was once a mountain. Anyone who ever camped in this area knows about the underground caves and rivers. Filthy coal filled waste water will easily find it's way into the groundwater.

It is a panorama photo for you to see a much bigger picture.

The next two photos were taken in the exact same spot with the first one in 1988 and the second in 2016. They show what the coal mining industry calls reclamation or contouring the land. 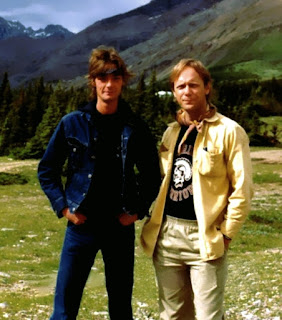 Yes it is a good move to halt the use of coal for electricity in Alberta. There is a tiny note in the fine print of the proposal not mentioned to the public. Coal mining will continue destroying this wilderness area until at least 2050. In over 30+ years from now a vast piece of Alberta will become a barren and uninviting toxic slurry. Our children's children will never forgive us for allowing this to happen.

Do you want to know what is in your drinking water along the North Saskatchewan River? This is the legacy left by decades of Conservative governments in Alberta. Will the NDP halt all coal mining once the power plants are converted?

Are you willing to let the coal mining industry put No Trespassing signs on Alberta's only wilderness park? 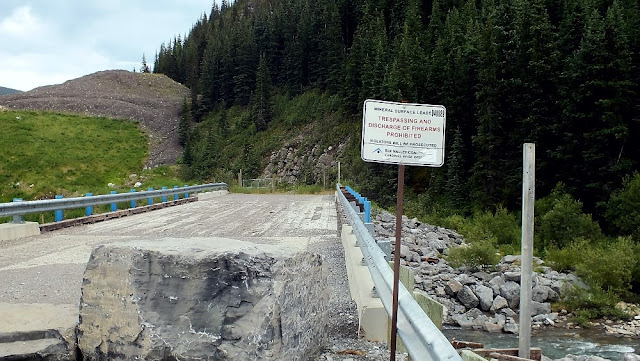 More Photos from my Collection

A Citizen of the World writes to America

You are giving the world a show better than any drama. President-elect Donald Trump is the winner.

He was picked apart by mainstream media in a way unbecoming of a democracy. While the media, all of it owned by a few moguls, were tearing him apart people began listening to him.

President Trump talked about many domestic issues most did not get to hear or read. Mainstream media, did not want you to know about those issues, since they directly affect you and the right to have a happy life.

The big corporate media, in fact began to make up stories, rather than report news to you. In all my years as a journalist I was beginning to find it difficult to separate fact from fiction. It was as though the United States of America was having its first Presidential Election. Thankfully I do not own a television.

It was indeed an extraordinary action for the media to twist the facts and bring the elected President of the Russian Federation into your election. President Putin is rather busy lifting the people of Russia out of poverty by creating avenues for them to do so. He is doing what we expect our elected leaders to do by prioritizing issues at home first. How did a simple Russian military drill make headlines as an invasion by the media?

As a friend outside your country, looking in, it appeared as though your life was being invaded by the media. We know these dangerous and misleading media headlines are the same ones who pushed you into invading Iraq. They love to see you at war invading countries who never did you any wrongs. Today as a result of their war loving ways you are involved in the atrocities being committed in the middle-east. We know the media earn billions with their lies by leaving out the facts and related evidence.

It must tell you something when President Trump tweets foreign policy and name calling. I sincerely hope you can tap into your cherished gift of creativity. Let us rid ourselves of the old ways by looking into a future as one planet in an immense universe.

Russia and many other nations want you as a friend and trading partner. Trillions of dollars have and are being spent on a single-minded corporate military industry. The result is a loss of faith in people, democracy, leaders and the right to live in peace.

The years of being in a race, nation against nation, are behind us. Getting to first is meant for a great baseball, basketball or hockey game. There are millions of good paying jobs available in a new industry where we clean up the pollution leftover from the past. Let us toast to a glass of fresh clean drinking water. Let your spirit and mind create domestic businesses and industries for a brighter and cleaner world.

I know the people of the United States of America and you have the spirit within you. We, the citizens of the world, would be grateful to have you look at our similarities. After reading Hillary Clinton's book It Takes a Village it's no wonder why she lost the election. Read her book and you will understand there is no Russian connection to her loss or Trump's win. She is boring.

Having had the honor of meeting him and listening to him I believe he represents the best of America. 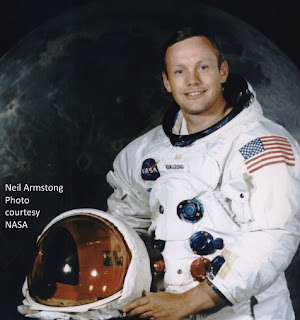 Save
Posted by denniscambly.com at 3:26 AM No comments: