The recent announcement from the Liberal Government under PM Justin Trudeau on the Canada Pension Plan left people feeling confused. This article covers Canada Pension for anyone working in the Private Sector. Public sector pensions are offered and run separately.

During the election campaign in 2015 the Liberals made the following promise.

We will help to lift hundreds of thousands of seniors out of poverty by increasing the Guaranteed Income Supplement for single low-income seniors by ten percent. This will give one million of our most vulnerable seniors, who are often women, almost $1,000 more each year. Because many seniors live on fixed incomes, we will introduce a new Seniors Price Index to make sure that Old Age Security and the Guaranteed Income Supplement benefit keep up with seniors’ actual rising costs.


We will improve quality of life for millions of Canadians by prioritizing investment in affordable housing, seniors’ facilities, early learning and child are, and cultural and recreational infrastructure.

It is impossible to talk about poverty without a common denominator defining poverty.  Canada along with nations world-wide signed the United Nations Millennium Goals in the year 2000. To date no Canadian government has defined, in economic or other terms, the meaning of poverty. Poverty is multi-faceted effecting people with uncertainties while living in a consumer driven society. Another committee made up of wealthy Liberal friends has been created to write another report on poverty sometime in the future.

One myth about collecting a pension requires a short note. Canada Pension or CPP is not welfare or a social services payment. CPP is deducted from the income earned by Canadians. To the people who made the statement during a long discussion on Facebook please look at your pay cheque deductions. You should see your contributions to Canada Pension Plan along with employment insurance, income tax plus many others. You and your employer contribute equal amounts to CPP.

Are you working two or more jobs and not seeing any deductions? It happens more often than believed among low income employees. This is poverty trap door where employees and employers make no contributions to CPP based on casual employment. Payments to CPP are not required nor will CPP be paid to you upon retiring.

About the Election Promise

On page 12 of the 2017 Liberal Government Budget 13,000 senior Canadians were lifted out of poverty. Later on page 225 they claim 750,000 seniors received an increase up to $947.00 each year since 2016. As you read the budget the number jumps to 900,000 low income seniors. It appears as though there is a lottery wheel someone spins and a lucky senior wins a small increase. While preparing income tax returns for over 9,000 low income Canadians and seniors no increase was found.

Increases are based on the rate of inflation usually announced in late May. This year the rate of inflation was 0.05 percent in May. In July the rate was increased to 2.5 percent. Guess who received the 0.05 rate? The election promise and the enhanced CPP are meaningless to those currently collecting a pension.

People are living longer in Canada and this one point is seldom, if ever, discussed. The moment a person turns 65 they are kicked out of the workplace, pay extra for dental, eye glasses and prescriptions, tossed into a seniors home overlooking a cemetery and left to go quietly into the night. For those who own a home Edmonton city council will buy or take it so they can run a stage coach on wheels through it. A lifetime of experience, love, family, friends and compassion are pushed into a home where seniors are left to die isolated from the world. A society based on consumerism does the same to people as it does to last year's electronic devices.

What the Enhanced Version Means to You

As stated the new improved Canada Pension Plan does not apply to those currently collecting a pension.

In 2019 the amount working people pay into CPP will increase. The best term is a rolling increase until 2059 when you decide to retire from work. What will it be worth in forty years? It takes a stretch of the imagination to make an economic forecast more than a few years. Consider the actual rate of inflation based on purchasing a three bedroom home in 1960 for $14,900.00. A three bedroom townhouse, built with wood, held together with glue runs above $300,000.00  today. (not including taxes and fees)

I do not offer economic advice to the reader. To anyone starting a reasonable paying job today find a financial advisor. Most of the banks and credit unions will help even with minimal amounts of money. Money invested in Canada Savings Bonds will mature as a worthless piece of paper. Registered Retirement Savings Plans are easy to use in case of emergencies and could leave you broke later in life. Think of an emergency account and a savings account separately to ensure you have both when needed.

Canadians pay more taxes than any of the so-called developed countries. Take great care of savings and investments by steering clear of taxable funds. Currently those who saved via taxed income are taxed a second time. Today you are taxed on the money you saved the day after you make it to 70!  It is another myth to hear people say seniors do not pay taxes. There are taxes on every possible purchase including rent, seniors prison lodges, property taxes and the list goes on.

Gold is a great way to save since you sell it for cash when you need it, hopefully, much later.

Comments and questions are welcome.


Posted by denniscambly.com at 5:23 PM No comments:

Are You Happy Snuggling with a Capitalist Corpse?

That's what the western nations want you to believe while feeding you a steady stream of advertising for newer, faster and better consumer goods. How many dollars did you spend since 2016 on your cell phone? How many TVs, monitors,laptops, tablets have you purchased since 2010? During the last 10 years how many automobiles have you bought and how much fuel did you use? Toss in the cost of insurance, taxes and repairs to get the real amount you spent. Are your costs higher than your income? I have not included food, fast food, alcohol, drugs or basic items.

The Party is Over

Almost all of your money has gone to corporations with factories in countries with close to slave labor wages. The west was booming with giant stores selling you a better version to keep the wealth in the hands of a few very wealthy individuals. Most likely your savings, if you have any, hand you pennies on your investment from the banking system. How are those credit card balances doing with the interest charges? Have you heard of any telecom corporations going bankrupt?

The countries with what was slave labor created wealth, industries and a high standard of living. No one sleeps on a sidewalk bench thanks to your constant need to consume everything on the planet. What you are hearing/seeing non-stop on radio, television, newspaper, magazines and the Internet is a fish out of water struggling to breathe. It's the corpse of capitalism devouring itself.

There are now more electric cars in China than the rest of the world combined. Russia, a market economy, is rebuilding cities due to neglect under the soviet system. 2.5 billion people had their first look at Russia with the World Cup during June and July. Countries world-wide make the west look as though it is choking on their dust.

There is no need to build a transit system through lower income neighborhoods to destroy it and say poverty was dealt a blow by the wealthy developers. Those promoting the destruction of entire communities are sick and need mental health services. Nations looking at the corpse of capitalism, build transit systems to decrease traffic, and move people at speeds up to 300 km per hour. Ours are as fast as a stage coach on rails. Bring back the horses.

For thousands of year accounting had 2 and sometimes 3 columns to get a proper balance. The third column rarely used until circa 1900 was for interest. Income and expense are the base of good accounting. Western governments created several additional columns I call Funny Money. It's of no value other than making you think the politicians are working from the town/city to the federal levels.

That is the first mistake people make when they believe the elected officials are the government. All of them, with few exceptions, are there to follow through on orders from the land developers and other corporations. 90% of it is fondly mentioned in the media by using the term Real Estate, something you in fact, will never own. It's a 12th century idea meant for the uneducated of the era and used today.

The only thing holding the western capitalist corpse, from realizing it is indeed dead is debt, or money that does not exist.

This cartoon found on the Internet says at least a 1000 more words. 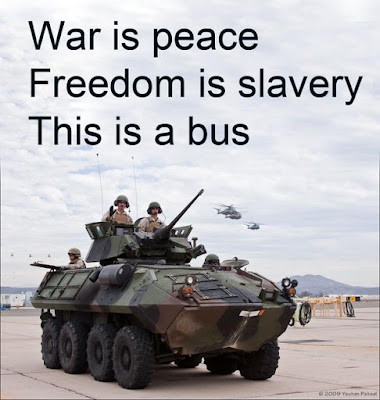 Posted by denniscambly.com at 8:38 AM No comments: