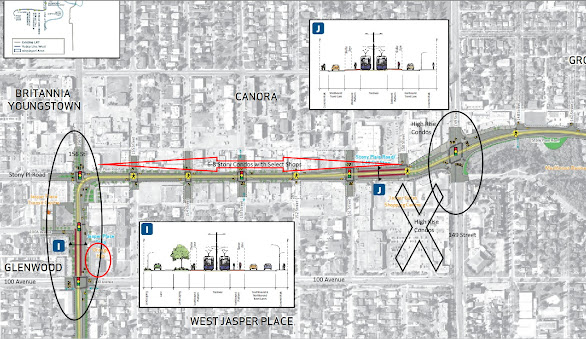 I see it as the most racist and discriminatory move as a part of the West Valley Line through the neighborhooods in West Jasper Place. The LRT or trolley car aka Bus on Rails will plough down Stony Plain Road effectively killing every small business. It was very easy to walk from home down Stony Pl Rd to the Bank, Pharmacy, Post Office, Grocery stores while stopping into a corner store. Now people will need to drive to further west or make their way to Meadowlark Mall. We don't expect it will be easy to drive to Meadowlark when construction begins on 156 Street.

The X on the map shows where TD and Safeway have already closed their doors. Edmonton council who have likely never visited the area easily voted to wipe out existing businesses. The long red arrow shows the area where buildings have been demolished and will be demolished. Same thoughtless procedure is underway on the south side of Stony Plain Road.

I found it amazing to hear a city councilor say the area only had sex shops, prostitutes and pawn shows. He must have missed the hundreds of other businesses including No Frills, Shoppers, dozens of neighborhood restaurants serving foods from multiple countries, along with London Drugs, Starbucks, Dollarama, Safeway and other big brand stores. Small businesses run by people who came to this country and built up a business have been and are being shut down. It has a lot to do with the area being populated by those people who will no longer be a problem.

For those who commute to work by a vehicle coming into the city via Highway 16A are in for a surprise. (You can expand the top diagram by clicking on it) Considering it took 4 years to construct a small bridge across the river there will be years of construction at the corner of Stony Plain Road and 156 Street including 100 Avenue. Traffic on 100 Avenue averages 25,000 vehiciles per hour during the morning and evening commute. I am guessing the same would be true of Stony Plain Road.

It is odd the company doing the survey prior to construction did not find the concrete block in the river. They could have asked me or 1000s of other Edmontonians about it since we knew it was laying on the river bed. We pulled a fellow who had too much to drink out of the river near the old bridge. He was very lucky since a small piece of that concrete held him up enough not to drown. It must be better to spent millions of dollars than be honest with the voters.

Take a real close look at the diagram above and please let me know where in the world a train can make a 90 degree turn. When I attended one of the many meetings I asked one of the engineers what they had in mind with the 90 degree turn and he looked rather dumbfounded. The train tracks will need to go behind the former Grant MacEwan Campus to make the corner and stop at the station. You will no longer be able to use Stony Plain Road as you travel east or west. As far as 100th Avenue goes two trains parked at the station, or moving like a snail, should make for an interesting wait time east or west.

It also means the businesses from 156 Street to 167 Street will be cut off from traffic due to councilors and city planners who never traveled the area. The big X is what the developers are eagerly waiting to build 12 to 14 floor condos. Both sides of Stony Plain Road from 142 Street to 156 Street will also be lined with up to 12 floor condos. They are the wood framed floor condos Edmonton city council approved of for the developers. I am sure the Fire Department is thrilled about them as they are about how they will respond to a fire in the area. The Fire Station is located north of 156 Street and Stony Plain Road. Good luck getting to a house or apartment fire with trains blocking the intersection. Those trolley cars sure do move slow especially when they hit a 90 degree turn. Perhaps the entire intersection will rotate.

The train then heads south on 156 Street to 89 Avenue where it makes another 90 degree turn on it's way to West Edmonton Mall then to Lewis Housing district.

It is very sad what the city is doing about the former Grant MacEwan Campus. City council said in one of their 100s of reports they wanted to reposition the campus as a hub for the community. They put their imaginations together and came up with the name Orange Hub.

The building sat vacant for almost four years since the last students used it. Twenty non-profit organizations met with the city committee that invited them to discuss a community based plan. All of the groups work with the Food Bank, housing, community based events, work with everyone regardless of race, creed, color etc. Disclosure: (I volunteer with one of the groups). At present every one of the community organizations have locations scattered around West Jasper Place.

All twenty were turned down by city council. The current mayor and council decided to stay away from community based groups and jump into the Canada Council trough. It'snot what you know when it comes to Canada Council it's all about who you blow. Alberta Arts council jumped in with $25 million and a non-profit company gathered up the money to take over Grant MacEwan campus aka Orange Hub along with another pig at the trough.

A few non-profits from West Jasper Place were kicked out of the building by city council. In the brochure Building a City around the LRT it reads; Establish land uses around LRT stations to
reflect the characteristics of its surrounding areas and each station’s role in the LRT network. An integrated community system with an emphasis on housing, shopping, pedestrians and bicycles with reduced car use.

I have big news for mayor and council we had all of that before you bulldozed and bullied your way into our community with a train. We do not need your train tracks nor your lies about how you would create your perfect community. As white as you are you would have been welcome to dine out in one of our restaurants owned and operated by a family from Pakistan. Unfortunately they were given a 30 day notice to vacate the building they operated out of for three decades. Nice white folks paid too much to recklessly spend our money.

Published by Dennis Cambly who has no relationship with a company who stole my ancestral surname dating back to Jacques Cartier and then to an area where Julius Caesar camped his armies in Italy. The company was started by an ex-Google employee with an investor from India. In my conversations with them I was told the name was simply an abstract object. If surnames are objects why didn't they use their own surnames? It's appauling that a corporation is allowed to use someone's surname and confuse later generations as to the ancestry of the name.

Posted by denniscambly.com at 2:04 PM