As we move towards the Edmonton municipal election I could not help notice how the media coverage has been next to none. There is never any talk about the economic side or as we may call it how much does the Mayor and Council spend each year. What projects get the majority of the money and others such as roads get very little. We still drive cars in Edmonton regardless of the $100 million spent on bike lanes used six months of the year. Many of our main roads are in horrible condition. Ask any driver if you are unaware of the road conditions. The city in the meantime have hit us will slogan after slogan: The Greening of Edmonton, Touch the Water, Build for Two Million, Smart City, Ribbon of Green, Edmonton River Valley Ice Strategy and One Million More.

Those are a few otherwise I would go on for another page of wonderful window dressing on the cost we pay. It doesn't matter which way you look at it we pay from Federal Payments, Provincial Payment and City Taxes it all comes down to one taxpayer at a time. The city of Edmonton uses some of the sneakiest ways to get our money of them all.

First due to name changes by city council this line goes downtown along Stony Plain Road, 104 Avenue, to West Edmonton Mall. It is commonly called Valley Line West and is expected to take five to six years to complete beginning in 2021. Construction has begun near West Edmonton Mall so you won't notice the traffic problems and destruction in between.

In order to assist you and ensure you don't get too confused the next diagram is the West LRT aka Bus on Rails I am writing for you information.

Due to the massive impact I find it best to provide you with the most recent diagrams of the route with its 16 stations/stops from downtown. The train will move onto 104th Avenue at 107 Street. 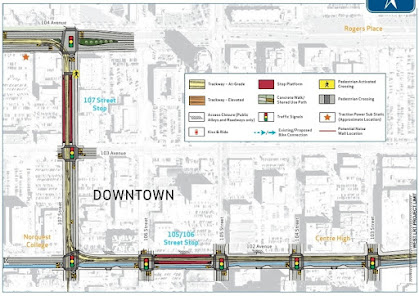 Now we travel along 104th Avenue and the first traffic snag we hit is 109th Street and 104 Avenue. There is one lane of traffic east and west along 104 with the train I mean LRT or Long Rail Trolley moving slow in both directions.

During construction this major intersection will detour you somewhere far from your destination. Getting into and out of any businesses up to 116 Street will be difficult at any time. Pity the business on both sides of 104 Avenue after being hard hit by a pandemic followed by years of construction. 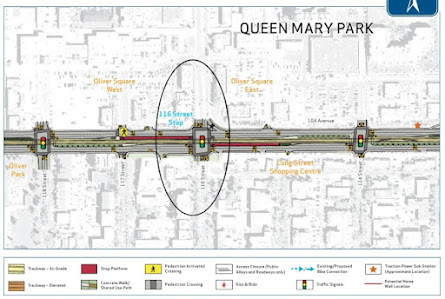 Then we come 116th Steet intersection once again under construction. 116th Street is another major road for those moving north and south as is 109 Street. You can expect this part to be under construction for two or three years. I am basing this on the amount of time the beautification and narrowing of Jasper Avenue is taking.

Jasper construction should hit 116 Street about the same time as 116 Street and 104 Avenue. Bike lanes are a top priority in our northern city, so you can leave your vehicle at home, and take a bike. Great planning deserves praise for the 100 people riding a bike during our mild six months of winter. 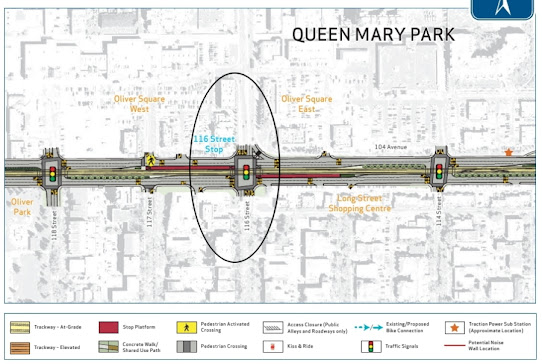 It is a tight squeeze along 104 Avenue at the best of times so prepare yourself for an even tighter squeeze. At some point along the section from 116 to another busy intersection at 124 Street there will be little to no room for any vehicles during and after construction.

The train will be at ground level since the city never looked at what Vancouver did with their Sky Train. At least Vancouver calls it a train. It does not run at street level causing massive traffic jams nor cause problems with bikes and pedestrians. The weather in Vancouver is in deep contrast to the Edmonton freeze-up starting in October through to April. When it is +10c in Vancouver it can easily be -36c with bitter cold winds in Edmonton from December to February. Council in Edmonton starting with Mandel decided the design should be at street level. They appear to believe this is Palm Springs.

124th Street will be a fascinating crash landing for vehicles north and south bound. Most buildings will be knocked down and all trees through to West Jasper Place will disappear as we move along 104th Street now called Stony Plain Road. 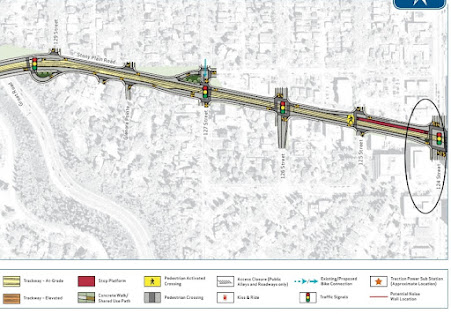 The recent updates say there will be vehicles allowed from 124 Street to the next big intersection 142 Street and Stony Plain Rd. This is where 102 Avenue meets 104 Avenue with a kind of twist turn into 142 Street. Should be fun deciding who goes first in which direction with two trains stuck at ground level along with 8 lanes of traffic north/south and east/west. There are two train tracks the same system used over 75 years ago with trolley cars. 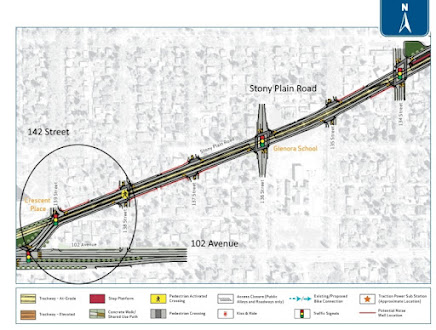 Is the LRT in Edmonton Environmentally Friendly?

Mayor and Council tell us the LRT will be environmentally friendly while every part of it is depleting the planet of non-renewable resources to build and maintain. To top it off this recent chart shows where we get our electricity.

Is that what we want to call environmentally friendly?

Mayor and Council did not listen to what the people of Edmonton told them. They only listen to the big developers eager to sell this obsolete system to you. It's an expensive experiment with the cost nearing $20,000,000,000.00 and rising. Council does not release costs to the media or anyone who wants to know.

However, some of us, have a extended background in economics and know where to look and how to read numbers. Example: The original estimate for the short train line from city hall to NAIT was $256 million, but, the almost final cost $2,540,000,000.00.

Articles will be released as early as they can be written so you have a chance to decide who you will vote for in the municipal election. Think what $20 billion dollars could have done rather than build an obsolete trolley train?

Why the media are avoiding this topic during a municipal election makes me wonder what's in it for them. (more to come)

Published by Dennis Cambly who has no relationship with a company who stole my ancestral surname dating back to Jacques Cartier and then to an area where Julius Caesar camped his armies in Italy. The company was started by an ex-Google employee with an investor from India. In my conversations with them I was told the name was simply an abstract object. My rebuttal was a simpler. If surnames are objects why didn't they use their own surnames? It's appalling that a corporation is allowed to use someone's surname and confuse later generations as to the ancestry of the name.

Posted by denniscambly.com at 4:00 PM